You are here: Home / family life / A Lesson in Letting Go

If you saw me tonight you probably didn’t know we had to put our beloved, old smelly gas bag of a doggy, Buddy, to sleep hours before. I wasn’t ready to process it just yet.

I will never forget the day Buddy came into our lives. We had just moved to Vegas and Connor was in first grade. We were walking past a Petsmart and they were having one of their adoption days. As I quickly tried moving my little boy along, this massive ape of a dog jumped over the portable cage, knocking it over, to get to Connor. He was wagging his tail and seemed to be saying, “Wanna play ball?” It was a forgone conclusion that he would be joining our family when my little blond hair boy said “Mom, please! I have NO friends here.” Moving guilt kicked in and Buddy was soon in the back of our car.

Buddy was a pain in the butt. He barked. A LOT. He would open doors and let himself in the house using the lever handles. He once stole an apple pie off the back of the counter and made it look like the pie just disappeared from the untouched plate. But we loved him. While the barking annoyed our HOA, the way he followed me when Bob traveled constantly was reassuring. Connor spent hours throwing the ball up our little backyard mountain to him and they were best friends. Buddy was good for us both.

While Bob was thrilled that Buddy joined our family while he was on a business trip, he quickly fell in love with the dog that could catch anything straight out of the air. Every night they walked the Seven Hills loop. Bob was loosing his stress and over 100 pounds. It seemed Buddy was even good for Bob.

When Carter started to walk, he fell a lot. One day he fell on Buddy and he snapped at him. We had figured Buddy had been abused in his previous home as he was scared to death of sticks. Carter had canes at that point and I was little afraid something may happen. My parents offered to take Buddy for a little while which turned into a few years as my dad became sicker. If Dad did nothing else, he made sure to throw the ball to Buddy everyday. Buddy was good for my dad.

After Dad passed Buddy’s big bark protected my mom. Little did anyone in her turning seedy neighborhood know that he was probably wagging his tail behind the block wall that projected that massive bark. She took over the throwing of the ball as it was just her and Buddy then. Buddy was good for my mom.

When mom moved here, Buddy came back home to us. In a u-haul, with Bob and Connor. 16 hours. With all the windows down. To say Buddy could clear a room is an understatement. Buddy was very good for getting rid of unwanted guests!

Carter was nervous around Buddy when he first came back but Carter could no longer walk and the canes were a thing of the past. Carter learned that Buddy had been afraid and that hurt Carter deeply. Carter learned that not everyone is kind to animals. Carter learned a new level of empathy for anyone or anything that relies on the kindness of people. Buddy was good for Carter.

Buddy has been sick for a while. He has lost 22 pounds in 6 months. He still perked up when he saw the ball but he now let Floyd chase it. Today his stomach was swollen twice its size. I knew it was time. Connor and I took him to the vet and my baby made the decision to put down his childhood best friend when he found out Buddy was not going to get better.

On the way home, Connor said “Mom, the hardest part was letting him go”

“Yes, letting the things you love the most go is the hardest thing in the world baby.” 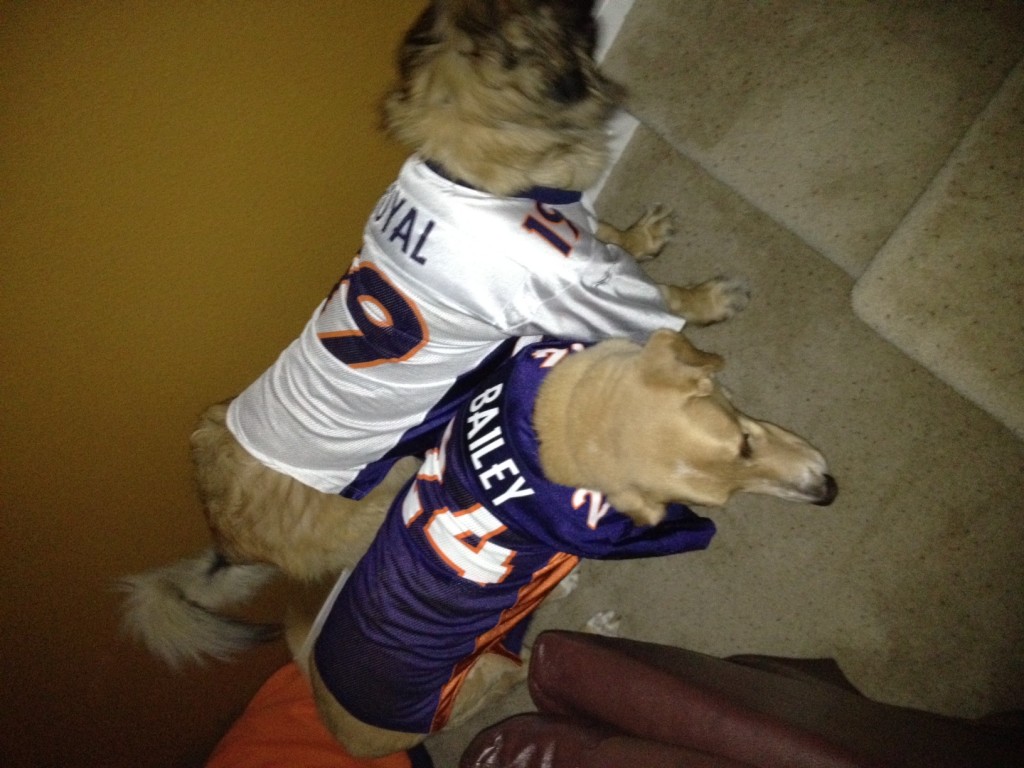 Buddy and Nala. Buddy is in the dark blue jersey.