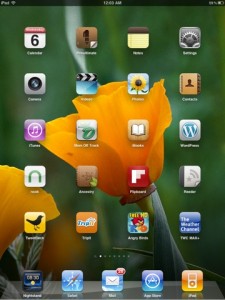 I snagged one of the elusive iPad 2’s!

I was at Best Buy the other day contemplating yet another Sony Vaio laptop for our family. Carter’s is a little over 4 years old now and he really could use a faster speed for all the things he does. When I walked in I half joked, as I always do, asking if the new iPads had come in. Of course the girl shook her head no and we made some jokes about how lame Apple is that they can never meet demand. Which we were then told by an eavesdropper that the reason why there was such a back order is because they are made in Japan and production has been difficult post tsunami.

So, off I went and purchased the aforementioned Vaio and as I was checking out, I guy walked by with two boxes of what appeared to be iPad 2’s. “Could it be” I asked in amazement? He informed me that they had received a box in while I was shopping but the people on the very long prepaid list rejected these. They were white and only 16 g’s. The equivalent of the red headed step child apparently in Mac geek world.

But I didn’t care. I have a 32 gig iPhone 4 and several Vaio laptops. This was just meant to be a shiny new toy for me to use at the hospital and while traveling. Mostly for reading, tweeting, catching up on the news, and light work stuff, At $499 I could justify that.

It was disappointing to open it and see that I had to plug it into the PC to sync it. Seemed counter intuitive. But it only took about ten minutes for it to be all updated,

Since 5 people in our family share the same iTunes account we have a pretty big library of stuff and I ended up with 7 pages of apps to weed through. Most of the ones made for iPhone look terrible on the iPad2. I started researching for a quick list on what I want to pimp my pad. So many of the iPad guru articles you read are focused more heavily on productivity than entertainment. I wanted to find a mix of things, from games the kids can play to organizing my chaotic life.

Calling out some of the best ipad 2 apps I have found for moms like me are: 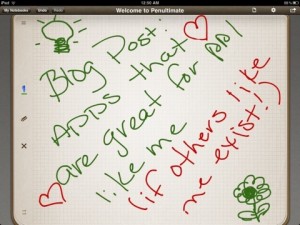 I am always forgetting to write things down because a paper and pen aren’t handy and typing on my iphone annoys me too much to use the notes function. This turns the iPad into a virtual drawing board for all those quick ideas. Plus, it doubles as a fun drawing tool for the kids when I need a quick boredom buster.

This appears to be virtually the same as the app available for the iPhone 4. I envision me shooting video during a basketball game and having it edited and ready to publish during the drive home. It is super easy to learn to create good looking videos you can push to a blog or youtube quickly. 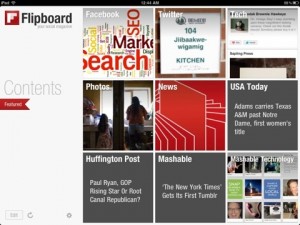 This is AWESOME for us rightbrainyz trying to keep up with the massive amounts of data a lefty can handle. It organizes twitter, facebook, google reader and it’s own publishing streams all in one magazine style layout. I love that you can tweet or facebook from right in the app.

Great way to catch up while the kids are at a lesson on a huge amount of content. Perfect springboard for new writing ideas or just tweets that are worthy of sharing.

I actually started this post using the wordpress app but sadly had to finish it on the laptop where I can easily add links and format text. I wouldn’t recommend this for trying to write long posts but if you are sharing a video (that you spiced up in iMovie perhaps) or a few photos this is perfect! It is also great at allowing me to quickly approve or spam moderated comments.

There are 3-4 big players in this market-iBooks, Kindle, Nook and one that I can’t recall the name of. *It’s late, OK*

I am partial to the NOOK just because we have had them for a few years so we have an extensive library. It was easy to download my latest book from the online library and open it in iBooks. LOVE how the pages turn. Just feels so natural. I think I will stick with those two for a while.

Some other apps that I thought looked fabulous on the new ipad 2 platform were:

That’s really all I have had a chance to get into today but I will write about some category specific ones as soon as get to play with them more. There are  a few good threads going on about this in the Mom It Forward forums if you need ideas before I have the chance to post more.

A few things I haven’t been impressed with:

Also, did you see my cool, fancy trick? When you view Mom Off Track from your ipad or iphone, you have the option to add the site as an app with the fancy button that has the logo in it right to your ipads homepage! So go do that today, K?

Are you thinking about jumping into all the hype and buying one? Why or why not?

« On Getting Opinionated
3 Premium WordPress Plugins Worth Having »