The newest member of our family, the much anticipated Leonberger puppy, arrived Monday safe, sound and happy into Denver International Airport via Delta’s Pet First program. We anxiously awaited her plane’s arrival and I was ready with water and her puppy formula and picked out a place for her to go to the bathroom as soon as she landed. I figured she would be stressed. She wasn’t at all. She hopped out of the crate enough to say “I’m HERE!” Her kennel was packed by her breeder with a soft rug,  a fresh meat bone, her favorite toy and her next vaccines safely ice packed to the top. Karen, her breeder, waited with her until the last second possible and I was there waiting on the other end. It worked out beautifully. For anyone considering using this route for transporting your furbabies, I would suggest you look into either freezing a block of water or securing the water dish to the crate with something because that is the one thing that came loose. Luckily it was a short(ish) flight since we don’t know where it came off.

It took us almost 4 days to come up with a name. But we finally settled on Kiara. Officially registered as Irresistible Princess Kiara of Serengeti. For those of you who don’t have kids that grew up in the Lion King era, Kiara is the daughter of Nala and Simba and I don’t think there was much stopping the name once Connor posted it all over Instagram and Facebook. However, Carter reserves the right to call her Baca when they are having Wookie talks. Leonbergers like to do that.

The first two nights were rough. She clearly missed her Leonberger family. She woke up at least 4 times those nights. But the 3rd and 4th night she slept until 5 am and then miraculously last night she slept til 7 am. Much more acceptable.

Floyd, our Treeing Walker Coonhound, certainly has his alpha male chest out but so far he has been nothing but kind and gentle with her. Well, as gentle as a 60 pound energetic Coonhound can be. Floyd walked over 4 miles this morning and then came home and still wanted to play. He has more energy than Kiara does. Kiara does what we call the lopsided puppy run and then flops down after about 5 feet for a nap.

Right now she is eating a mix of Eukanuba Large Breed Puppy or Taste of the Wild Puppy kibble, Puppy-Bac puppy formula mixed with goats milk, Evangers canned food, and raw fruits and vegetables. She loves strawberries and licks them like a popsicle. She also loves ice and comes running every time someone gets some from the ice maker.

We did a couple short sessions with her wearing a leash and collar. She is fine with both but we don’t leave her collar on in the house due to the number of tragedies we have heard about tags getting caught while playing. As you can see, she thinks she would rather carry around her own leash. I’m going to start getting her used to just putting the Halti or Gentle Leader (I am not sure what brand I have) leash on next week.

Here are some pictures of her 8th week. If you want to see more, I post a lot on Instagram so follow me there to get your Kiara fix. 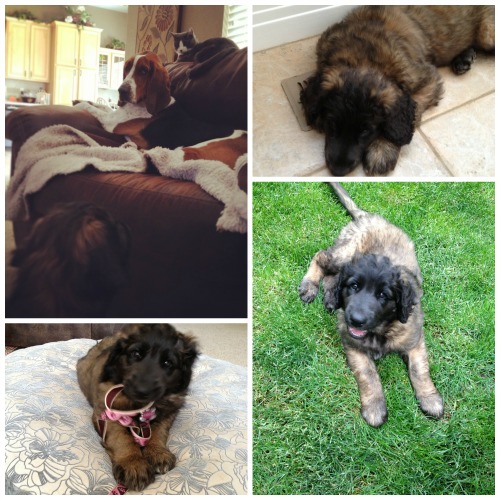 « Confirming the Rumors, We ARE Expecting
Summer Is California »