I’ve spent the last couple of afternoons working at The Food Bank of the Rockies in what is known as the Reclamation Area. This is the main area that donated food gets processed and sorted. I have learned a lot these past few days and wanted to pass it on in hopes that what I have seen helps you as you prepare to donate food to food bank. 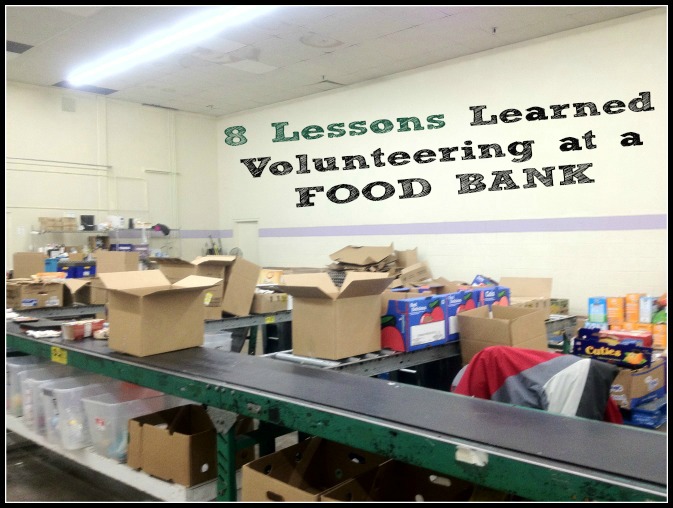 On the 1st day we processed foods that were donated from area stores that had been pulled from their shelves for one reason or another. This food had been stored for some time and it all needed to be wiped down with bleach and sorted into 40 lb boxes by its type. I was shocked when I got there and was handed an apron and gloves to protect myself from the bleach. I couldn’t fathom why on earth we were wiping food with a chemical. Then I opened my first box. The bottom was full of rodent poop. OK, I can see why now. Cans, bags & boxes were all given a bleach wipe before heading to the sorting area.

I literally, personally had to throw away over 3 huge trash cans, each weighing more than 350 lbs, of dented and expired cans. What broke my heart more was all of the expired baby food. What I did learn though was that you can donate expired canned goods up to 6 months from the date on the product. Just make sure it isn’t dented. A minor dent is OK but anything near a seam or a sharp dent will have to be tossed. Baby food that is even one day expired or in a glass container won’t make it through reclamation either. Neither will anything open. A box that has an inner lining still in tact-think a cereal box with the plastic bag inside- is OK but if the bag is open, its trashed. 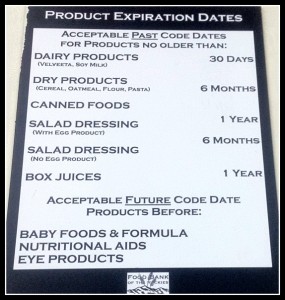 Lesson 2: Companies Donate A LOT of Soda and Junk Food 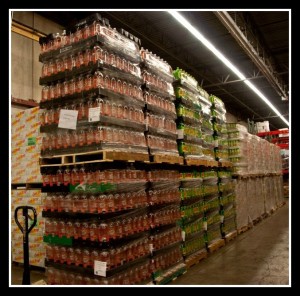 Soda donation at food bank of the rockies. Photo Credit to Kia Ru

On a trip here last year with some bloggers we saw pallets and pallets of Sun Drop soda. All of us were taken aback. Apparently, that is par for the course. During my volunteer time I processed more 2 liters of various types of pop than I knew existed. Coming in a close second were Pop Tarts. I am certainly not a health food fanatic but I think everyone agrees that they wouldn’t want to open a food box full of only that to feed their family. I wouldn’t.

Lesson 3: Variety is Nice When You Donate Food to Food Bank 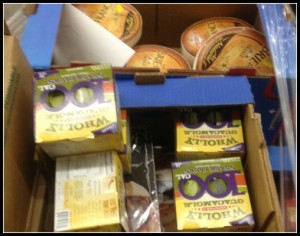 On Day 2 I packed boxes for individuals. These are 40 lbs boxes donated directly to people in need. Knowing these mostly go to households, volunteers try to pack a variety of foods in the boxes. It’s hard to make a variety out of ramen noodles and creamed corn! Volunteers would search through boxes and boxes to put together things that made sense-pasta with pasta sauce and so on. Finding canned proteins, like tuna and chicken was a nice surprise and something divided up carefully. When donating, be a little creative.

There are a lot of sweet, elderly, regular volunteers that sort food. Send in your teen to do some lifting. They need strong people to keep the conveyer belts filled and the trash cans empty. Kids have to be 14 to volunteer at Food Bank of the Rockies. They have to be 16 to be there unsupervised.

Lesson 5: Think About Going With Them

I am not going to lie, the first day when we pulled up and saw a large teen group escorted by 3 sheriffs I was a little worried. The next day the sheriffs were escorting a group of adults.  There is a large diversity among the people who volunteer. Obviously one of the reasons to volunteer with your kids is to expose them to different views of the world. We had a great experience working with all of the volunteers here.

Lesson 6: Know What You Are Comfortable With

Working at the Food Bank is physically demanding. While there are different areas and stations for people of different ability levels, there is no getting around some amount of lifting. They do need people to sit and re-tape boxes and such but those are few and far between. I’m sore. Really sore after 3 days. 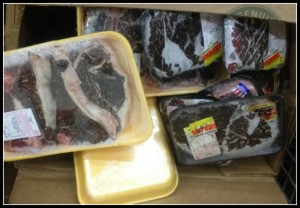 I was pretty discouraged Day 1 at all the packaged and processed food donated. But on Day 3 we processed a large amount of frozen food from places like Sams Club. I was pleased to see all the meat, cheese and some freezable dairy. What I was really bothered by is that the meat that is deemed not fit for human consumption is sent to the Zoo. I am guessing this is where the open grain bags go as well. In talking with people about this I guess it isn’t an issue for wild animals and the zoo knows how to process it safely for them. I don’t know though, I wouldn’t feed my dog meat I wouldn’t eat so this sat funny with me.

I have said this before and will say it again. The buying power of Feeding America banks is great. They know best what the community needs and with money they can buy dairy and produce which they are always short on. It’s this simple. 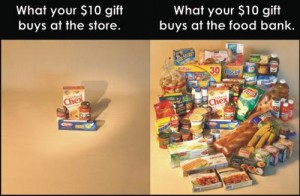 All in all this was a great experience to do with my teen. I learned a lot about what actually happens to that food collected for food banks. After my time in reclamation, I would discourage people from running food drives that reward kids for the ‘most cans or weight’ donated. I personally feel while people have amazing intentions with these types of drives, it leads to people sending in the less expensive cans of food that are on sale-not always the most nutritional. I would encourage you instead to encourage the goal to be the most money raised. Of course, help as best you can. I know a lot of couponers that are very good at gathering tons of food for very little money. My advice is meant more for the average family looking at ways to make the most of their donations and time.
For more reading here is another great post on the subject: Can the Cans

« Mrs. Holliday Kicks Lupus Butt
How Do We Help Our Kids Make Good Choices (and is it our responsibility when they dont?) »