You are here: Home / and chaos ensues / How Do We Help Our Kids Make Good Choices (and is it our responsibility when they dont?)

Last year I wrote a hard post about my biological father being homeless. It is interesting how many people I surprised. I think we often forget when we meet people as adults in surburbia PTA that people have stories behind them. I think we are so quick to form someone whole identity from seeing them in their mini-van driving,  middle class living life that how they got there never is asked.

Today I am asking it because of a conversation on my facebook wall. It was prompted by the sharing of this link by someone I really respect: 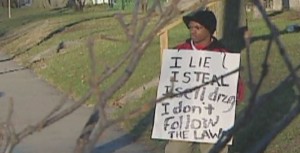 I started to wonder how the kid got to this stage? Forget what you think of the sign and ask what the backstory is here? Is this the moms first attempt at ‘fixing’ the problem herself?  What makes a kid at 14 start selling drugs? Where is the parental responsibilty in that? It was suggested that I had a black and white thinking that bad kids are a result of bad parenting. I actually don’t think that. The truth is I don’t believe there are ‘bad kids’. I believe there are kids (and parents) that make “bad” choices, even long spiraling series of choices in some cases. It was suggested it was easier to make bad choices when you grow up poor. But I don’t really think that is the case either. I know kids from really wealthy families that have made some really bad choices and I know kids from really poor neighborhoods that make bad choices.I would say it is pretty equal in my life’s experience.

I grew up POOR. We lived in a house with a duplex in front on 17th Ave & Van Buren. If you know the Phoenix area, your jaw probably just dropped. It is ‘the hood’. Then we moved to the much better neighborhood of Central and Indian School (yeah, not really) When I didn’t go into the restaurant at 5 in the morning, I rode the city bus into school that picked up and dropped off in front of the liquor store (starting when I was 7, alone).  Then in highschool my life completely changed. Yes, I still lived in the not so great part of town. But I went to a private all girls Catholic school. And guess what? Some of those ‘rich girls’ were more ‘messed up’ then the kids from my block. Some of their parents were more absent than if they had been working 60 hour weeks.

I am ALL up in my kids business. To the point you could (and they do) call me a stalker. So do their friends. My kids friends parents know if they want to know what is going on, I am the one to ask. I have outed more kids and more plans than they care to admit. And honestly, I hope they will thank me for it someday. Other parents ask how I know some of the stuff. I can only say its cause I listen. For whatever reason I have always been that mom kids talk to. Am I naive enough to think I know EVERYTHING? Nope. Nor do I want to. But I can truly tell you my kids have no opportunity to be selling drugs to anyone. They just don’t have the time or the opportunity.

I didn’t either. Even though I had a lot of freedom being a ‘latchkey’ kid. My parents always knew what I was up to. They knew who the neighborhood kids were and they knew who they didn’t want me running with. They also kept me very, very busy with sports and extra curricular activities. Yeah, remember those computer classes I took during the summer or 350 days a year of swimming? I think that is difference. Drug problems (selling and use) are an issue with wealthy kids because there is very easy access to both pills and money. Drug problems are also an issue among poor kids. I personally think parental and community  involvement is the big key in helping kids make better decisions.

I am a big believer that it takes a village to raise a child. I can’t tell you how thankful I am to have other parents and coaches in my kids lives that serve as another pair of eyes, another set of ears, another shoulder for them. I can’t be there all the time-even as a professional teen stalker 🙂

But I am truly asking as a conversation starter, what do you think makes that difference in the choices kids make? We all know that family who in our eyes did ‘everything right’ and had a kid who made some very bad choices. What made the difference for you? How did you get to your current life spot? How are you helping your kids not get to the spot this sign wearing teen is in? Is it luck, money, parental involvement? and honestly, at 14 do you think that wearing this sign is going to do anything or is it more a way for the mom to feel she is doing all she can?